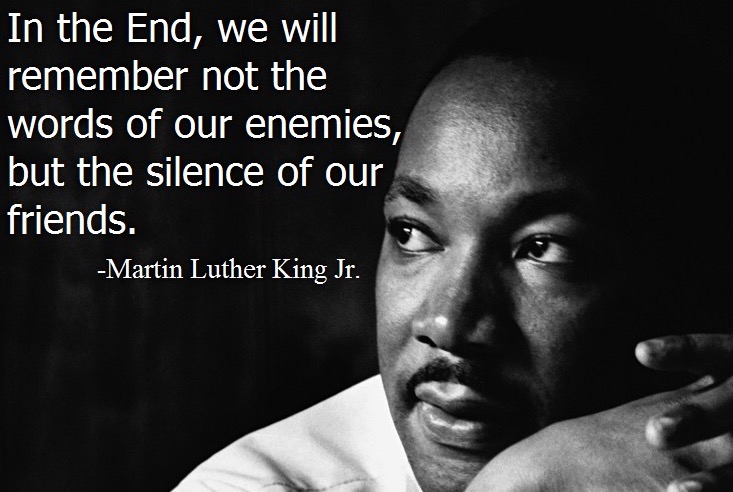 Dark days will come in life. Sometimes they show up out of nowhere, other days they are self-inflicted and we can watch them roll in like the tide. The thing about dark days is that we all have them at some point. Trials in love, financial strain, career uncertainty, family problems, marriage heartache, infertility, cancer. The hard times in life come in So. Many. Ways. It is for these moments that Martin Luther King Jr. so beautifully and eloquently offered his wisdom.

In the end, we will remember not the words of our enemies, but the silence of our friends. Martin Luther King, Jr.

In some of the hardest times I have ever gone through there were people who were unkind. There were people who were unaware of how their judgements landed. The funny thing about that is I have to think really hard to remember them because in the long term, they were blips on the radar that disappeared into nothingness. Sure, the words or actions may have hurt at the time but they have no influence on my life.

In the end we don’t remember the words or actions of insignificant people. In the end what hurts us to the core is the silence of our friends. The silence of the people we consider our kin, our compadre, our people. MLK’s quote brings an interesting question to light, if they are silent in the hard times, were they really a friend after all? There is the argument that in the hard times people might not know what to say. I get that. I wholeheartedly get that. But, here’s the thing, for me, for my life, I want to be surrounded by people who show up regardless of if they know what to say or not. Some of the most amazing things have come out of “I have no idea what to say… And I am here.” I am in my 30’s and Hubbz is in his 40’s. We are at a beautiful place in life where the quality of the people around us is much more important than the quantity.

In this life, people need people. People desperately need people. Hubbz and I have gotten into the work of showing up for people. The richness it has drenched our life and relationships with is astounding. I urge you today, take MLK’s advice and go show up for people. Regardless of if you know what to say.