This Parenting Thing is Bananas 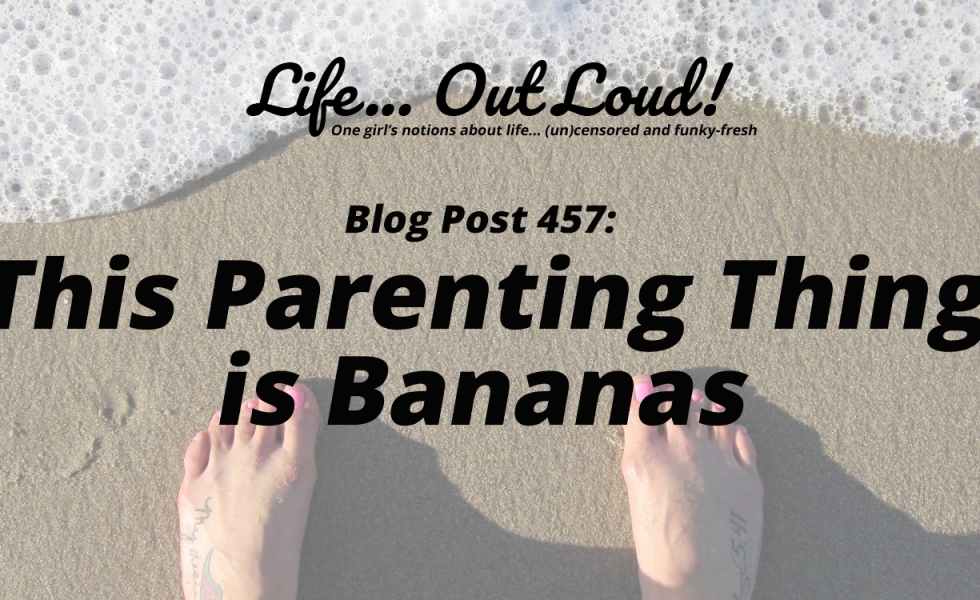 Our son is almost two and watching a not-so tiny human learn the ways of the world has been fascinating. Being privy to seeing his mind work as he explores this planet for the first time has been one of the coolest things I have ever done. Recently our son was posted up in his big-guy chair at the table eating a banana. Since he’s at the stage in life where he basically thinks he’s 17, he no longer wants his bananas cut up and they must be whole. This fact alone makes my heart ache and I am confident next time I blink he will probably be driving or graduating or getting married… I die. I also digress.
My son was happily chomping away on his banana and it broke in two. If you know anything about almost two-year olds you know that basically when something doesn’t go their way they lose their adorable, insane, almost 2-year old minds. My son lost his bananas over a banana and there was literally nothing I could do to console him. The more I stood there trying to reason with him the worse it got. I showed him now he had two bananas, were before he only had one banana. I showed him how he could hold a banana in each hand and before he only had one banana for one hand. None of that mattered to him because nothing I said could put the banana back together and that was what he wanted. When none of my reasoning worked, I used every Mommy’s secret art- distraction. I pointed to an imaginary bird outside and fed him some eggies using airplane sounds that made him laugh. Disaster averted.
As I laid in bed that night reflecting on my day I replayed the drama over the banana. It got me thinking…
There are going to be many, many, many, more times in our son’s life that I’m simply not going to be able to put the pieces back together for him. This fact makes my heart do this weird palpitation thing and if I can be super transparent, it gives me mild anxiety. It also reminds me that I must cling so tight and white-knuckled to Proverbs 3:5… and while we are at it, probably verse 6 too.
5 Trust in the LORD with all your heart and lean not on your own understanding;
6 in all your ways submit to him, and he will make your paths straight.
There is only one place that I can put my trust and confidence and that is firmly in the hands of Jesus. Real talk? Those words are cringe-worthy for a recovering-perfectionist. Not because I don’t believe it or know how but because I have a penchant to control things. Proverbs truth would require that I release my grip on situations and outcomes and hand them over to the Lord – completely.
While we were busy praying for BabyB, God was busy preparing our hearts to love this cool little dude he has entrusted us with. One thing that has become glaringly obvious these past two years is that our son is as strong and independent as a child can be. That independence is going to allow him to soar but it is also going to cause him to stumble. My job in those moments is to be there, steadfast in love, gently guiding his path and pointing him to the truths of God’s Word. I won’t always be able to put the pieces back together but I can point our son to a God that can.
The Terrible Twos have 110% descended on our home and it’s bananas more than it’s not some days. I am learning as I go, and though I like to pretend I do, I don’t have all the answers. What I do have though is a whole lot of faith, endless amounts of love, a repertoire of solid distraction techniques (LOOK! A birdie wearing an ascot!), and the ability to find the humor along the way. Though it may be bananas, I’ve decided that for now, for this season of life, I will leave my anxieties at the foot of the cross and cling to the Truth laid out in Proverbs 3. For this moment, that’s entirely enough.

← Of Love and Flower Obsessions
The Art of Boxing: Round II →